The plates of tuition, cheaper of vehicles have existed for almost as long as cars. The first were made of porcelain baked onto iron and ceramic. In later years, were made of leather, plastic and copper, while during the Second World War were used soya beans pressed and cardboard. The evolution has been cons...

The plates of tuition, cheaper of vehicles have existed for almost as long as cars. The first were made of porcelain baked onto iron and ceramic. In later years, were made of leather, plastic and copper, while during the Second World War were used soya beans pressed and cardboard. The evolution has been constant until you reach the license plates present in the moment, as the echo license plate acrylic.

Currently all vehicles must have a registration, this is an obligation by law that requires a safety measure for cars, and property records. Precisely for this reason, every vehicle that travels should have one and that gives way to a variety of plates that exist in the market with different materials.

How it works the system of registration of vehicles Spanish

In the system of enrolment Spanish, since the year 2000, the plates should contain the european flag with an "E" in reference to Spain, more four-digit numbers ranging from 0000 to 9999 in all their possible combinations, and finally four letters of the BBB to ZZZ without including the vowels, or the letters Q or Z. This gives the possibility 80,000,000 tuition different that will not be repeated even 40 years later, pretty impressive.

The raw materials used to make license plates include sheets of aluminum, adhesive films and adhesive pre-printed and colored, and paint. In the blanks of aluminum are usually pre-cut to size by the manufacturers of metals and supplied in this form to correctional institutions or other manufacturers plates.

The design of license plates is limited to a size and thickness standard that is fit to the productions of tuition in the majority of vehicles.

Other properties, such as colors and coatings reflective, continuously improved over the years to improve visibility, primarily to help enforce the law, and to lower costs.

What you need to know about the license plate acrylic

One of the most modern are the ecomatrículas, or tuition acrylic, which exceed the classic metal plates. Unlike what you may think, these plates are more resistant to the wear caused by the incidents of the solar rays and the blows by other cars, thanks to that they are manufactured with polycarbonate. It is a material that is subjected to a treatment of resistance to the action of UV rays, therefore, the letters and numbers contained in the registration does not become unreadable because of the sun.

The ecomatrículas are flexible, which allows them to remain intact under the blows of other cars, without bend or break easily. And the best thing is that are cleaned with the utmost ease, do not have a relief well to remove the remains of insects is much easier.

Although it seems very wonderful, you must be cautious and not acquire this type of tuition in any place, as not all are legal. It is best to buy them in stores specialized in tuition and dealers, provided that the squares bear a reference side. Ask for the accreditation certificate of approval and make sure that the reference number on the certificate is the same as that in the plate.

Where to get the license plate acrylic?

If it is a new car from the same dealer you can order the acrylic plate, but if the brand does not offer such an option then you can search on the internet on the web Ecoplaca, that sells this type of tuition.

To do this you will require as documentation to permit movement of the car which shows the personal data, the ID on both sides and a receipt as proof of payment. On sites like Audioledcar you can take advantage of the comfort that it gives can be bought from your home without problem and in a short time.

Yes after you receive it at home you'll have to install it. Below we give the details on how to do this

How do I install the license plate acrylic cheap?

There are several options, among them:

Let's review the reasons to acquire a ecomatrícula:

It cannot be falsified as they incorporate an alphanumeric bar code encryption is one-way, and in it are entered the important data of the vehicle

Everything indicates that we are the smart choice for its multiple benefits and low cost. So if you want to change your license plate or you don't know what to choose, you already have all the information you need to buy the smart way. 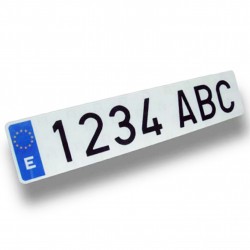 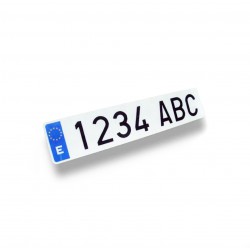 Products in this category

Tuition acrylic cheap approved for your car. Renews the aesthetics of your vehicle with these plates, good quality and economic price. Purchase these license plates and cámbialas the old damaged...

Tuition acrylic small approved for your car size "Alfa Romeo". Renews the aesthetics of your vehicle with these plates, good quality and economic price.