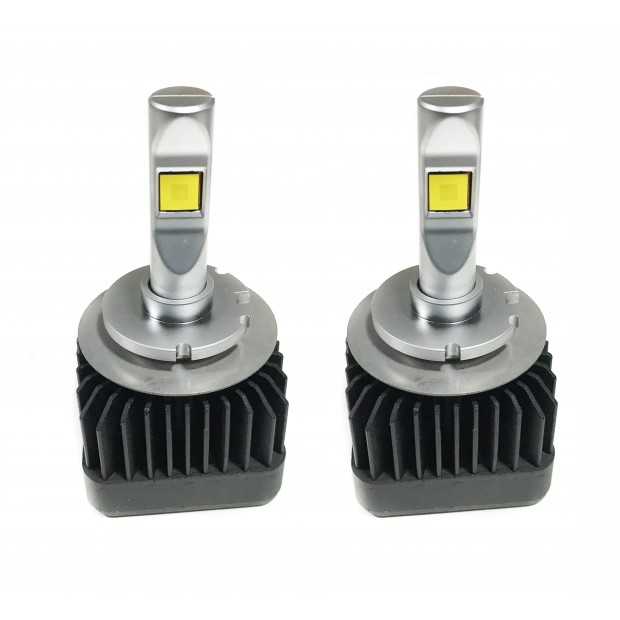 Kit conversion LED headlights D1S. Convert the headlights to xenon your car lights LED D1S brand ZesfOr®. Installed this kit of led bulbs d1s in just a few steps and switch to the world of led.

Turn your headlights xenon LED D1S with this kit led brand ZesfOr. Just install and ready to run. Head over to the world of led. Valid ITV (approved). Lumens 3000. Price for full set of two bulbs.

Kit d1s led ideal for installation in cars. This kit replaces the bulb and the control unit of xenon, that is to say, you have to remove both and connect it directly to the connector in the car (the one that connects the ecu with the vehicle) that will be a positive and negative 12V.

The big difference between headlights of xenon and led lamps d1s is that the xenon have a greater depth while the LED has a larger amplitude. In this way, the xenon will come away while the led open up more.

As a general rule this difference is apparent in two main scenarios. If we use a lot the car on motorways it is ideal to xenon because we want to see the more far better. If instead we use the vehicle for city or back roads it is ideal to install led d1s since what we want to see is more the environment that are far away.

How do I install LED lights D1S?

Easy and simple, just have to remove the original light bulb of xenon and the ecu (eye that in some cars it takes two switchboards, one in the back of the bulb and the other under the headlight) and connect the light bulb d1s led to the positive and negative that arrived in the ballast of xenon.

Install led headlights d1s is a very handy solution if we have been cast-a unit of xenon as the single led consists of a light bulb and the xenon bulb and a switchboard so that changing a xenon as a general rule it will be more expensive, and the likelihood that one of the two components to fail is higher.

Specialists in headlights conversion led d1s. Any doubt contact us.